"Somebody is upside down!": building a bingo app in React

TL;DR: I built a small React app which is a bingo card with Wordle-style shareable emoji grids. You can find it here, or view the source code.

“Everyone shouts at the same time”: Starting a new social game

Just before the Pandemic started I came up with a concept for a fun activity at the friday night social at WCJ, the swing dance association here in Gothenburg. We would watch a bunch of Lindy Hop routines (specifically team performances) and play bingo with the things we saw.

I used the bingo card generator at osric.com to print out way too many cards with commonly seen moves and formations, and also some silly things like brightly coloured trousers.

It was fun: we had some beers, I gave out sweets as prizes. We quickly realised that yelling stuff out was the most fun part.

Then we weren’t able to meet up again for some time, but it had been fun running the game so I started working to make Team Lindy Bingo Online a reality.

I built up a huge YouTube playlist of notable competitions and performances, refined after each game.

I found a couple of services with voice chat where you could all watch the same video at the same time (all now closed down - presumably due to unsustainable pandemic usage levels).

These services were awkward: they didn’t work on everyone’s computer, and they didn’t filter out the video audio from people’s voice channels. But it kind of worked: it was fine to have the video volume way down low. Yelling stuff out was the most fun part.

I shared out links like bit.ly/teamlindybingocard3. The card generator was mostly designed to generate cards to print out, so the card is at the bottom of a lot of UI , but it kind of worked (note the anchor tag at the end of the URL which mostly scrolls you to where the card is).

While waiting for people to arrive and sort their sound out, I played a 10-hour loop of the Price Is Right theme tune to set that gameshow mood, then (as a matter of tradition) I played this Wild short showcase by a Lithuanian group to kick things off:

We played pretty much every week for a few months during that first winter and into the spring. There were never a lot of people in the chat, but dancers dropped in from all over the world and I had a small group of regulars.

We came to dread getting a card with “Brightly coloured trousers”.

We shouted at our screens a lot.

We debated what “Wedge formation” actually means (it’s a filled-in triangle, not a V formation. Don’t @ me).

We watched a lot of great dancing. 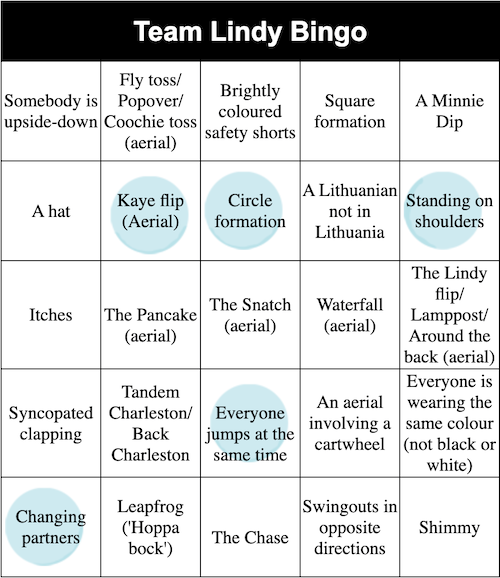 Eventually I tracked down the developer and got a Pull Request accepted to add a flag which would hide the rest of the UI so that you can only see the card. This made the experience pretty reasonable on mobile, so you could have the bingo card on your phone while watching the videos on a bigger screen.

The word list was stored in URL query parameters, which came with a couple of challenges:

Firstly, In order to be able to share sane URLs I used the Bit.ly URL shortener, and I needed to create a new Bit.ly link every time I updated the word list, since on a free account, Bit.ly links are not editable. I ended up editing the word list after most games as I learned what wasn’t working and what was missing.

Secondly I fairly quickly hit the 2000 character limit of the length of URL that Bit.ly will let you shorten. I’m guessing this limit is partly historical: most browsers have extremely large URL limits (tens of thousands of characters), but Microsoft browsers used to support a max length of 2048. In the end adding a new word meant removing an old one.

Finally, the word list needed to be formatted as a continuous comma-separated string in order to be used with the bingo card generator, which was a bit awkward to manage.

Running the game every week was a much needed injection of undemanding social interaction in an otherwise pretty lonely time. But after a few months, interest started to tail off: people got ‘zoom fatigue’ or just struggled to enjoy watching an activity they weren’t currently able to do themselves.

So after 12 games, Team Lindy Bingo Online went on indefinite Hiatus, only coming back for a one-off game at the online christmas party in 2021 (during which I realised far too late that the new video-watching system I was trying out supported a maximum of 8 people with voice chat 🤦).

But now dancing is starting up again, and I’ll be able to run a game in-person soon, armed with the learnings of running it online so many times.

I worked on a Next.js project at work before the summer and really enjoyed working with Typescript and modern React, with functional components and hooks. I appreciated the clarity of working with immutable state, and the way that the compiler points out mistakes before I notice them.

So I thought I’d have a crack at building a new bingo card in plain React with Typescript. After a false start, I initialised an application with:

…and remarkably quickly I had an grid of randomised words from a JSON word list, where clicking a cell changed its colour:

“The Snatch (aerial)”: The problem of state

Then I ran into the problem that I understand all React developers run into sooner or later: managing state.

In this implementation, each cell is managing its own state with useState. But now I wanted to add a button to reset the card by clearing all the stamps.

My Object Oriented brain wanted to approach this by sending a message to all the cells to tell them to reset their state. But that’s not how things work in React: parent components send props down to child components, and child components fire events which can be intercepted by their parents.

reset! is an event-shaped concept: if I send a prop down to a component like reset: true, then when I try to reset the component again, it won’t re-render because the value of reset has not changed.

Thankfully I have some helpful and experienced friends and colleagues: @Burgestrand and @PooSham pointed me in the right direction.

The solution I landed on was to have the App component manage the state with useState, and instead of passing down an array of words to the Grid component, I send down an array of objects which contains both the word, its stamped state, and a toggle function which flips the stamped state and updates the whole system state to reflect that change.

I won’t show all the code which makes that work here, but here’s a simplified version of the type definition of the elements of that array:

I’m pretty pleased with the result - I was worried that the code was going to be either hacky or hard to wrap my head around, but it’s turned out to be quite elegant. Here’s what the new card looks like: 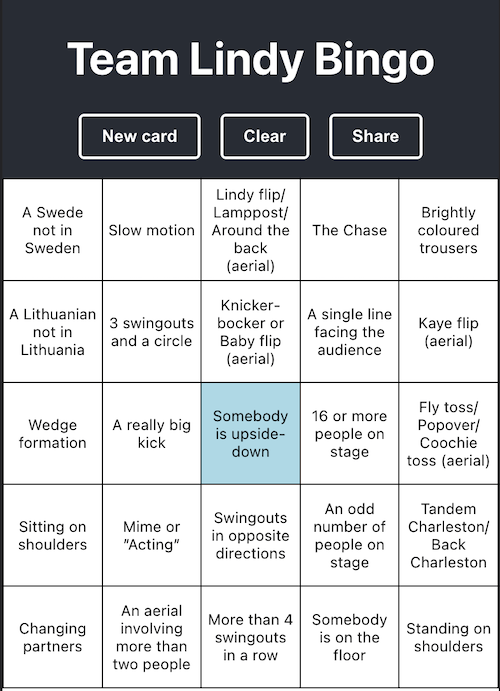 You can have a play for yourself at dgmstuart.github.io/bingo-frontend (best viewed on a phone).

“A hat”: polishing and bikeshedding

I’ve since done a bunch of unnecessary polishing and bikeshedding.

All unnecessary for sure, but apart from being a learning opportunity it makes me happy, and that’s part of what side projects are for.

But by far the most unnecessary feature I’ve implemented (and one of the most fun) is shareable emoji grids.

At the time of writing, Wordle is a big deal: it’s a simple word game that releases one puzzle every day, and it just got acquired by the New York Times.

Its killer feature is that you can share an abstract image of the result of your game, but rather than messing about with images, the image is made up of emoji, which are just text so can be pasted pretty much anywhere. It’s kind of genius. I think they look especially great in Discord: 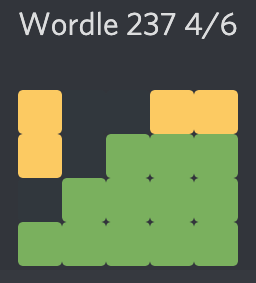 So of course I had to implement a similar share button to output an emojified bingo card: 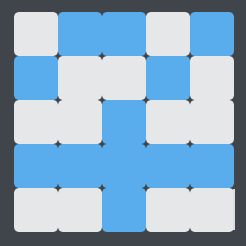 Building the actual grid is pretty simple: it’s just mapping over the array of CellData state. Testing it was a bit more challenging, partly because that involves interacting with the clipboard, but maybe that’s a post for another day.

In the meantime I’m looking forward to being in a room with other dancers and shouting “Somebody is on the floor!” some evening soon.